Support for organizing international congresses in Québec City: Three prizes of $10,000 each awarded to scientists 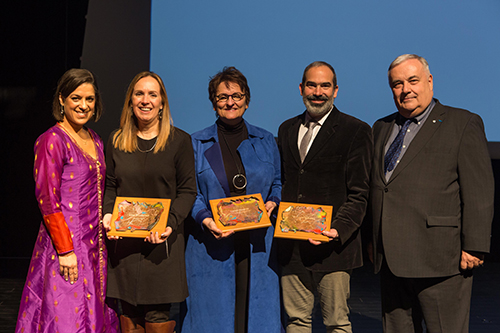 The ceremony took place on January 16, 2020, in the Le Diamant theatre as part of the Ambassadors Recognition Gala organized by Québec City Business Destination.

Biannual Conference of the International Association of People-Environment Studies (IAPS)

“The many opportunities that conferences allow for sharing ideas and networking are vital to developing knowledge, sparking research collaborations, and advancing scientific careers. For FRQ, these awards are a way to contribute to the international reputation of Québec research and promote economic development in the region through science tourism.” – Janice Bailey, Scientific Director of Fonds de recherche du Québec – Nature et technologies.

“We’re happy to be working with Fonds de recherche du Québec. Recognizing the involvement and contribution of Québec City researchers in securing and organizing international scientific conferences is of the utmost importance to us. Thanks to these influential people who are leaders in their fields, Québec City wins big on so many levels as an outstanding business destination.” – Pierre-Michel Bouchard, President and CEO, Québec City Convention Centre.

Through its activities and mission to attract conventions and major events, the Québec City Convention Centre generates significant local economic benefits, while enhancing Québec City’s reputation around the world. The Centre is certified LEED-CI Gold, EB Silver, and AIPC Quality Gold—the highest certification for quality in the industry—and was named World’s Best Congress Centre. It is known for its high management standards, its staff’s ability to think outside the box, and its outstanding customer service.

Fonds de recherche du Québec, which reports to the Québec Minister of Economy and Innovation, is tasked with nurturing the strategic and coherent development of research in Québec, funding Québec research and researcher training, creating partnerships that will enable them to fulfill their mission, and promoting and supporting knowledge mobilization. To learn more, go to: FRQSC, FRQS, FRQNT.