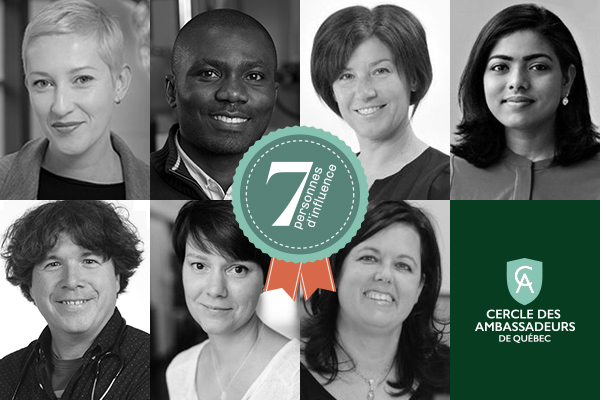 Québec City’s Ambassadors’ Club and all of its members are feeling extremely optimistic for the future, despite that gatherings and events were recently prohibited due to the global pandemic. A case in point? Seven new influential professionals, mainly from Université Laval, have joined the Club. They will bring their experience to our organization—and major conventions to Québec City by 2022.

The contribution and hard work of the Club’s ambassadors is crucial for attracting major international events to Québec City. Thanks to their reputation in their respective fields and expansive network of contacts, these dynamic and influential partners help develop Québec City’s economy and expertise in several key industries. For example, in 2019 alone, 16 international conferences that were spearheaded by ambassadors generated over $11M in economic spinoffs for the city.

“The dynamic mindset of our ambassadors is simply amazing! Québec City’s business tourism will soon pick up again thanks in part to these researchers and scientist who are confident about holding events in the city and realized the advantage of getting involved in organizing international conventions. The Québec City Convention Centre as well as local hotels, venues, restaurants, tourist attractions, suppliers and all sectors of the city are looking forward to welcoming conferences, business meetings and other events again,” said Mr. Pierre-Michel Bouchard, President of Québec City Business Destination and President and CEO of the Québec City Convention Centre.

Here is a list of the new ambassadors who will be bringing major events to Québec City:

Created in 2013, Québec City Business Destination is the official meeting and convention bureau where planners can get all the information they need to organize any type of business event in Québec City. It is the result of a partnership between the Québec City Convention Centre and Québec City Tourism. The two organizations brought together their sales forces in order to attract conferences, conventions, meetings and other events to Québec City.